What these guys were able to achieve in this short movie is incredible, demonstrating an excellent style and care in all phases, from pre-production, production to post production.

The work of OFFICE KINGDOM lasted approximately one year.

After shaping the idea and the subject (by Salvatore Centoducati) we moved on to the pre-production phase, where we laid the foundations for the architecture of the “normal” world and the Fantasy world.

The work was done entirely by only four authors and, depending on the phases, each played a different role.
After a work of realization of “concept” dedicated to visualizing the world to be invented, Eleonora Bertolucci has created the initial sketches for the “office” world environments and has subsequently digitally painted some splendid Color Keys, panels in which they are pre-visualized the shades of color that will serve to tell the story emotionally.

Giulio De Toma, after having sketched numerous main and secondary characters, then dedicated himself to the search for the character of Gianluca and the Burocrate Finale.
The ability of his work is clear: he managed to characterize so well the character that, despite the film does not talk about himself or the reason why he ended up in that office, we public looking at Gianluca, we can perceive the background, its social belonging, its character.
After the realization of numerous preliminary sketches, deepened later by technical tables such as turn-around, tables of expression of the characters and proofs of color and costumes, the character of Gianluca came to light. 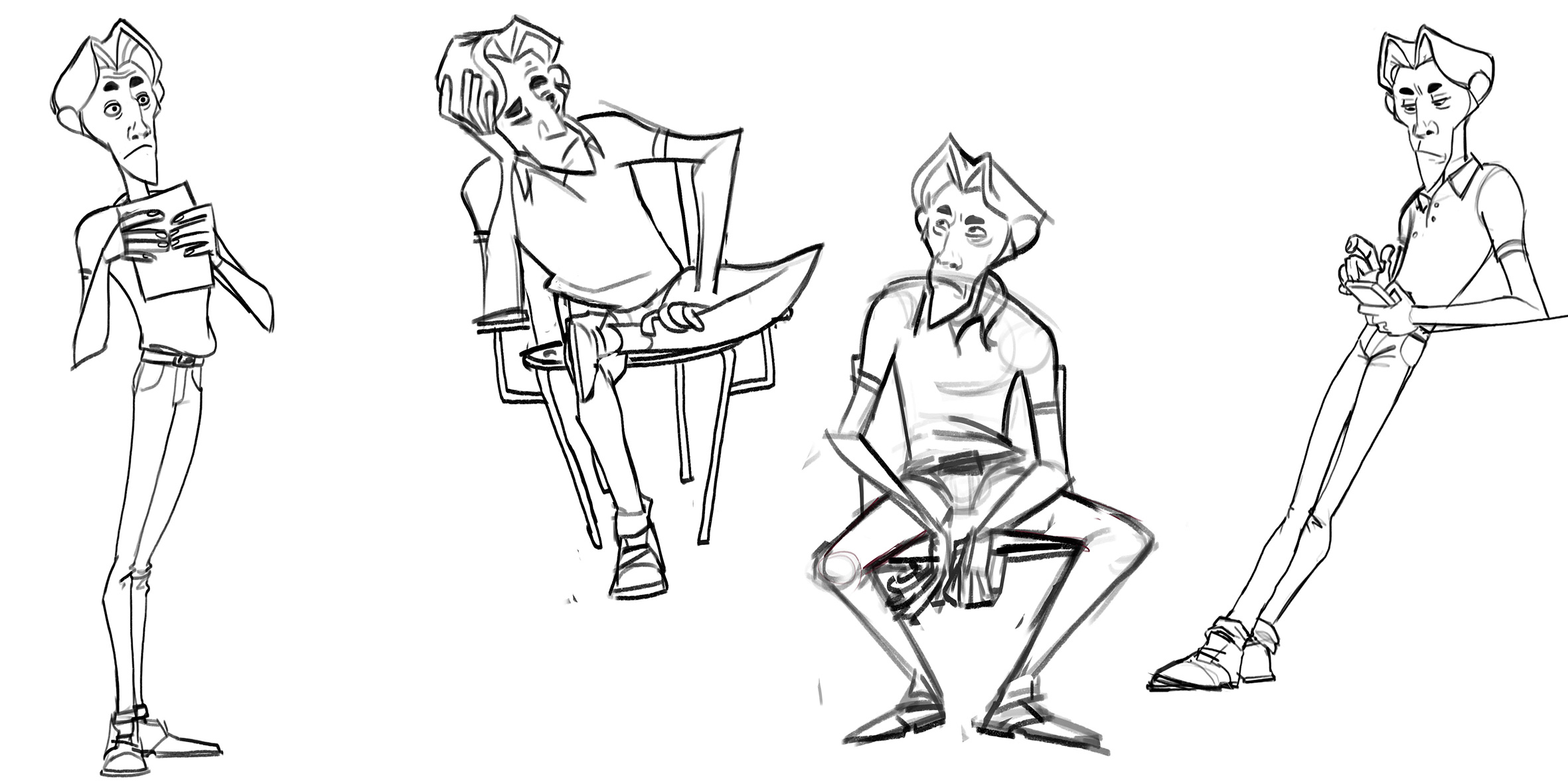 Ruben Pirito, has made a lot of sketches dedicated to exploring the Fantasy world and to the graphic creation of Barbara’s character.
Ruben has designed a long series of beautiful candidates. Once the “right” Barbara was chosen it was a lot of fun to create the armor that best suited the fantastic style of the over-office world. Ruben later also created extraordinary versions of the various monsters and zombies that Barbara faces in the film. Salvatore Centoducati, meanwhile, worked on the screenplay and then on the short storyboard, looking for the shots that best serve to tell the story at best. 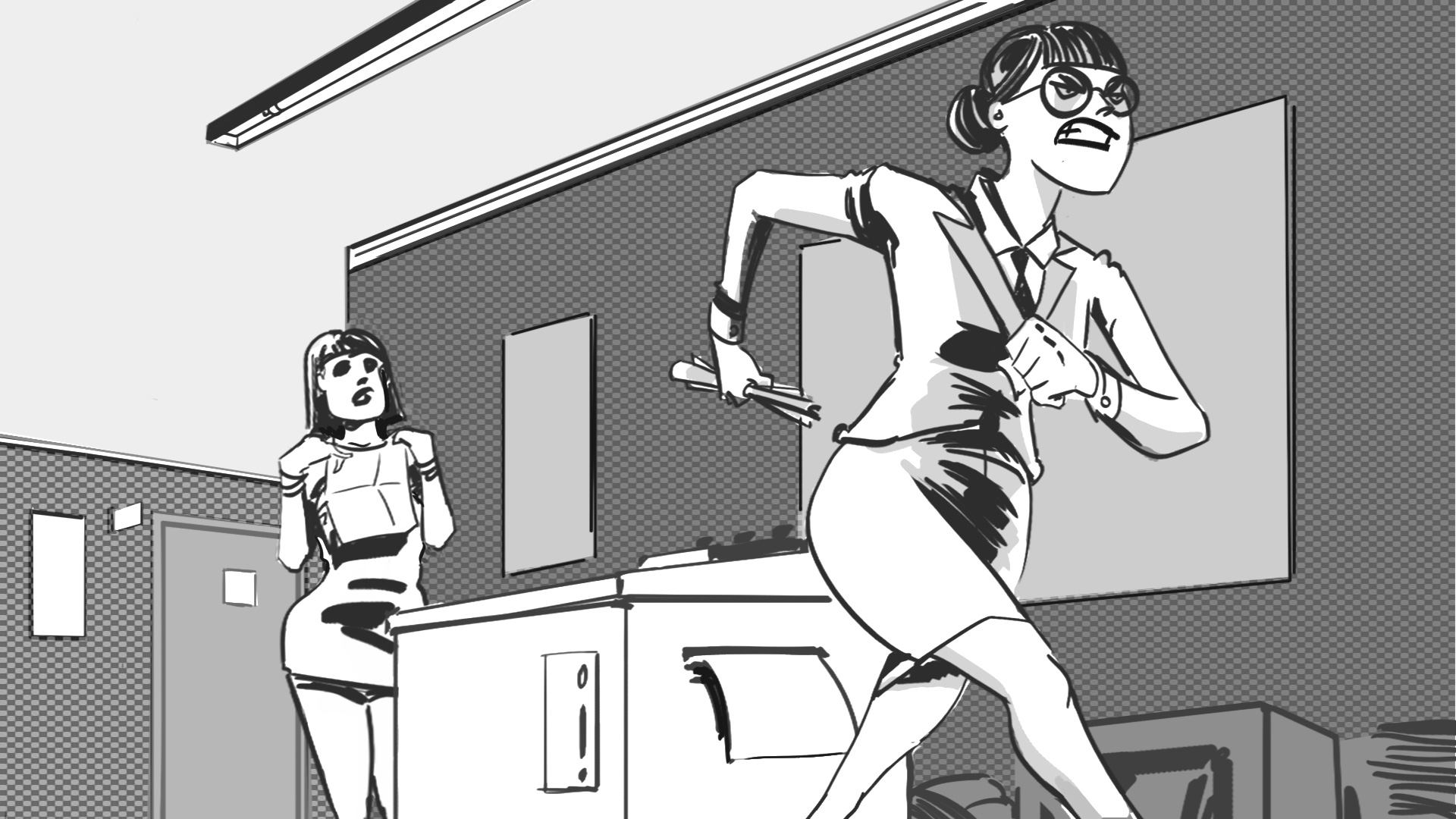 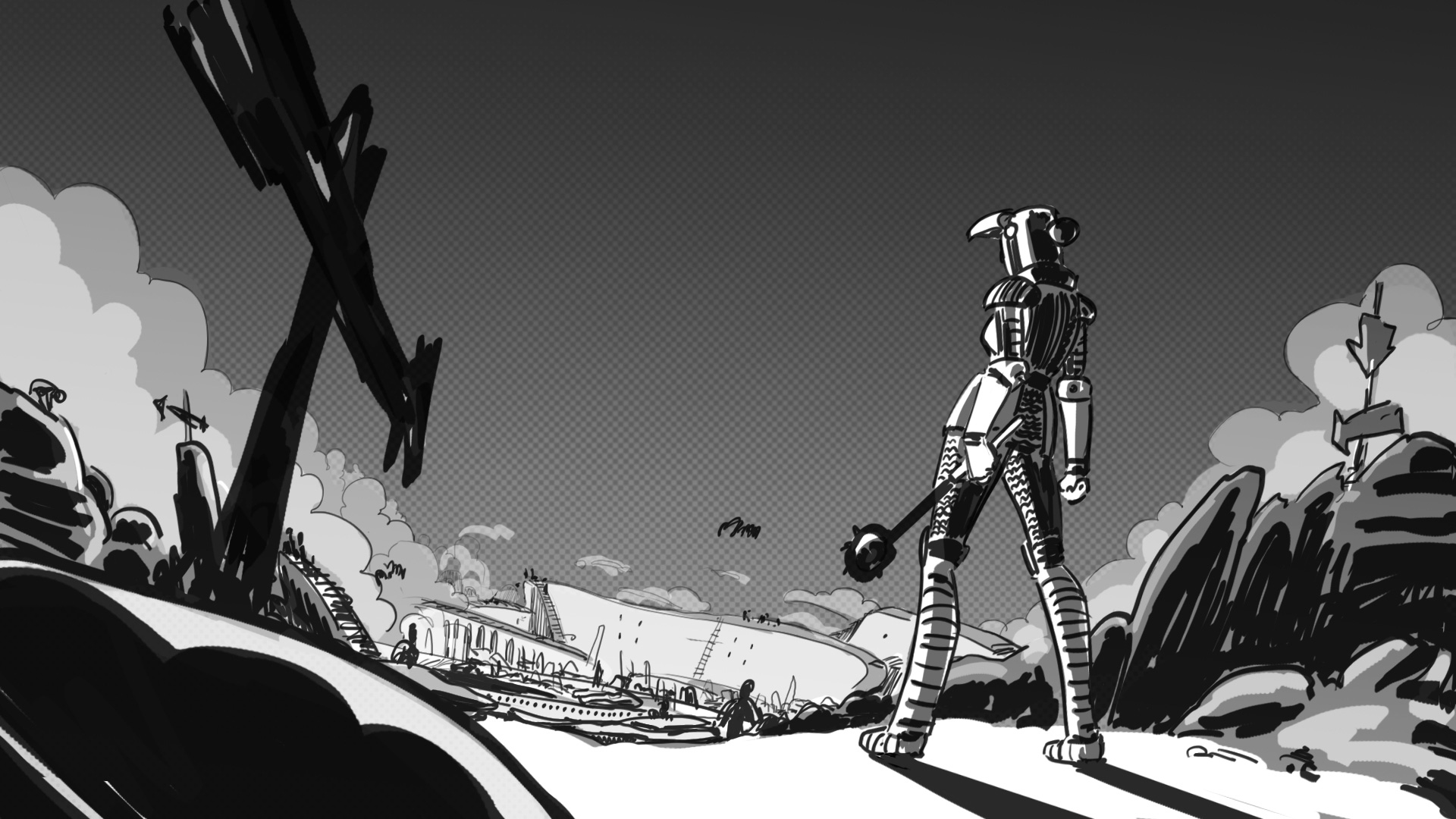 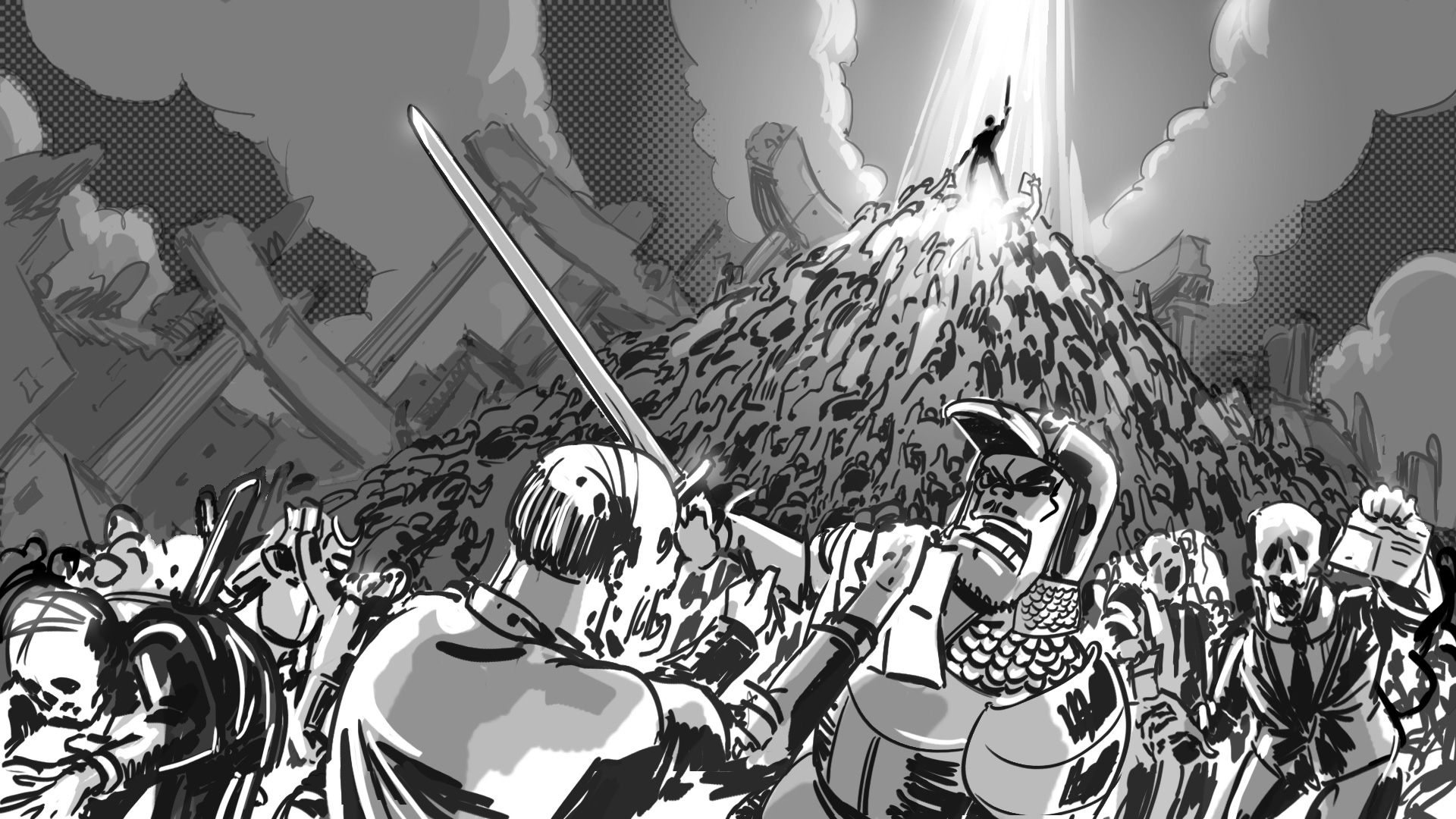 After the pre-production the team members have covered more roles: from the polygonal modeling of the characters (Eleonora) and to the Rig (Eleonora and Salvatore) to the layout (Giulio and Ruben) starting from the storyboard realized by the same Salvatore. 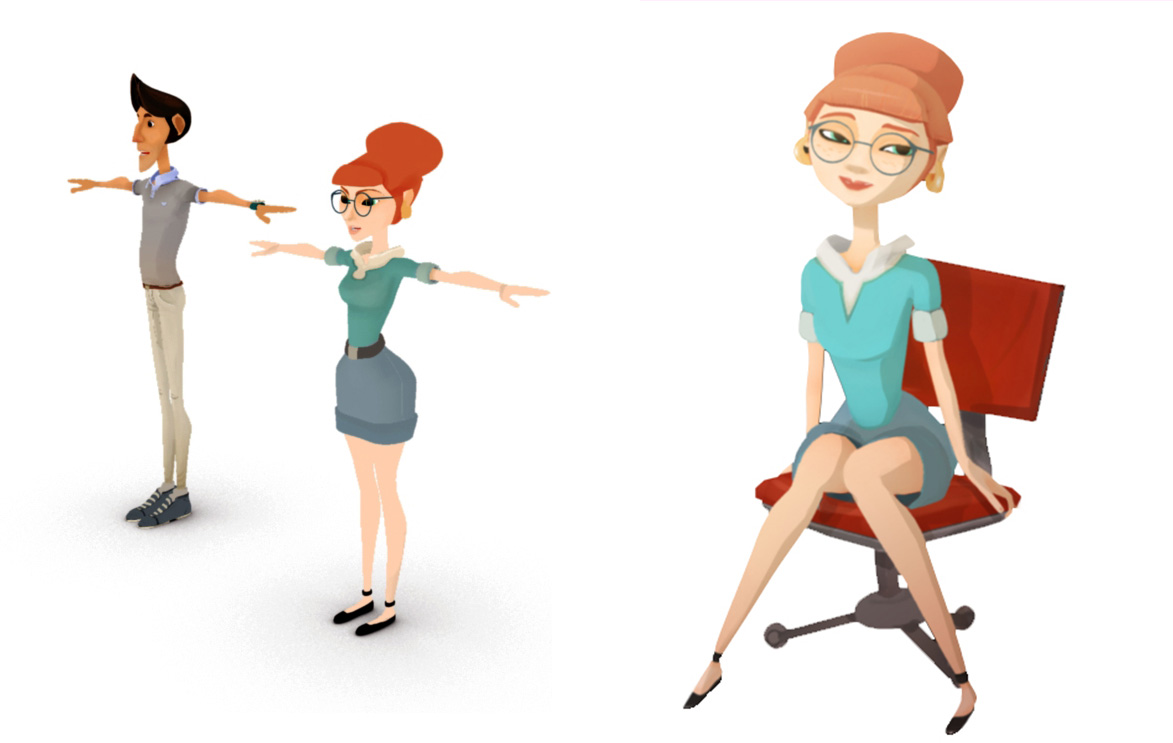 The Backgrounds of the layout were used as pencils for the subsequent, brilliant coloring by Eleonora Bertolucci. 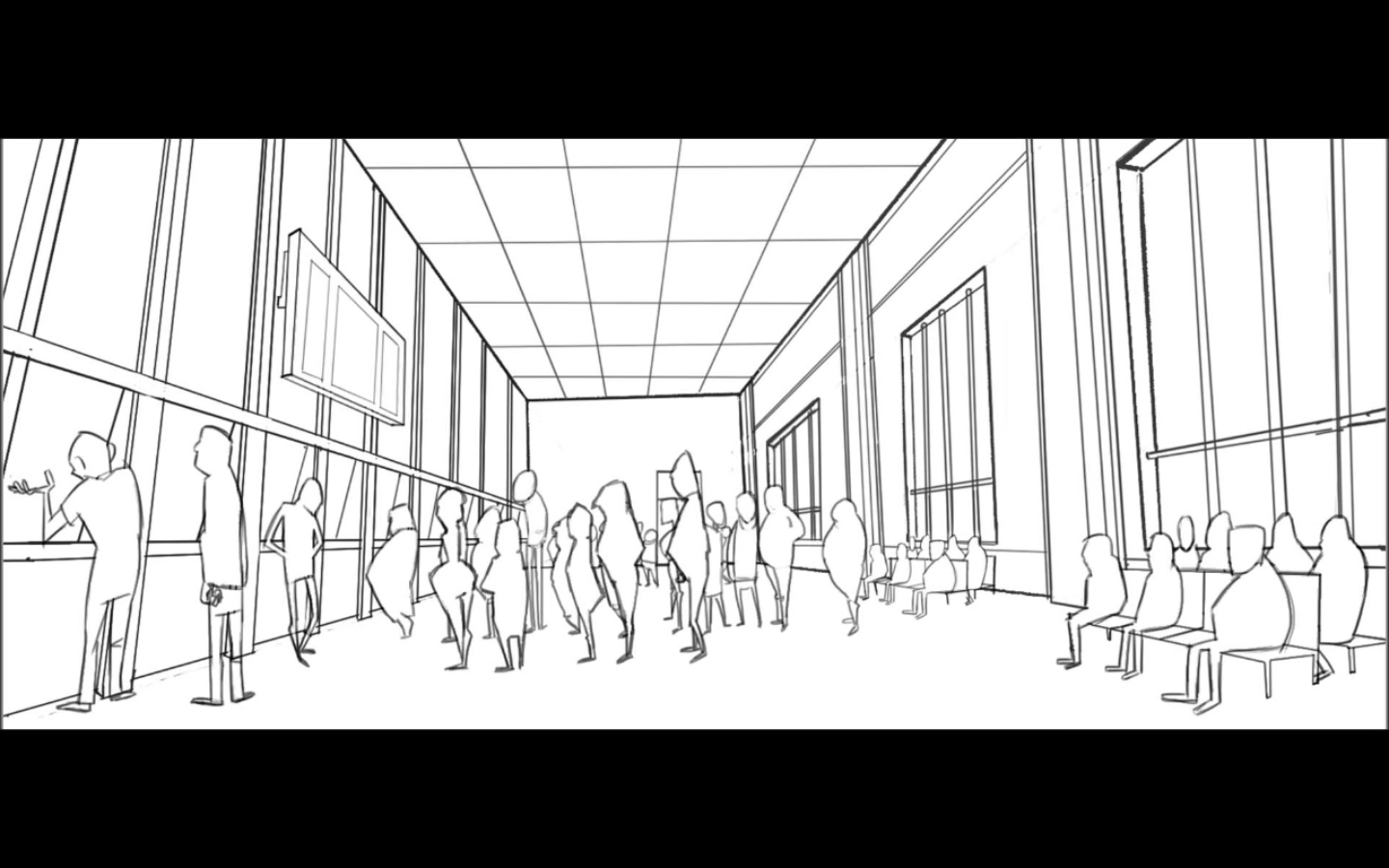 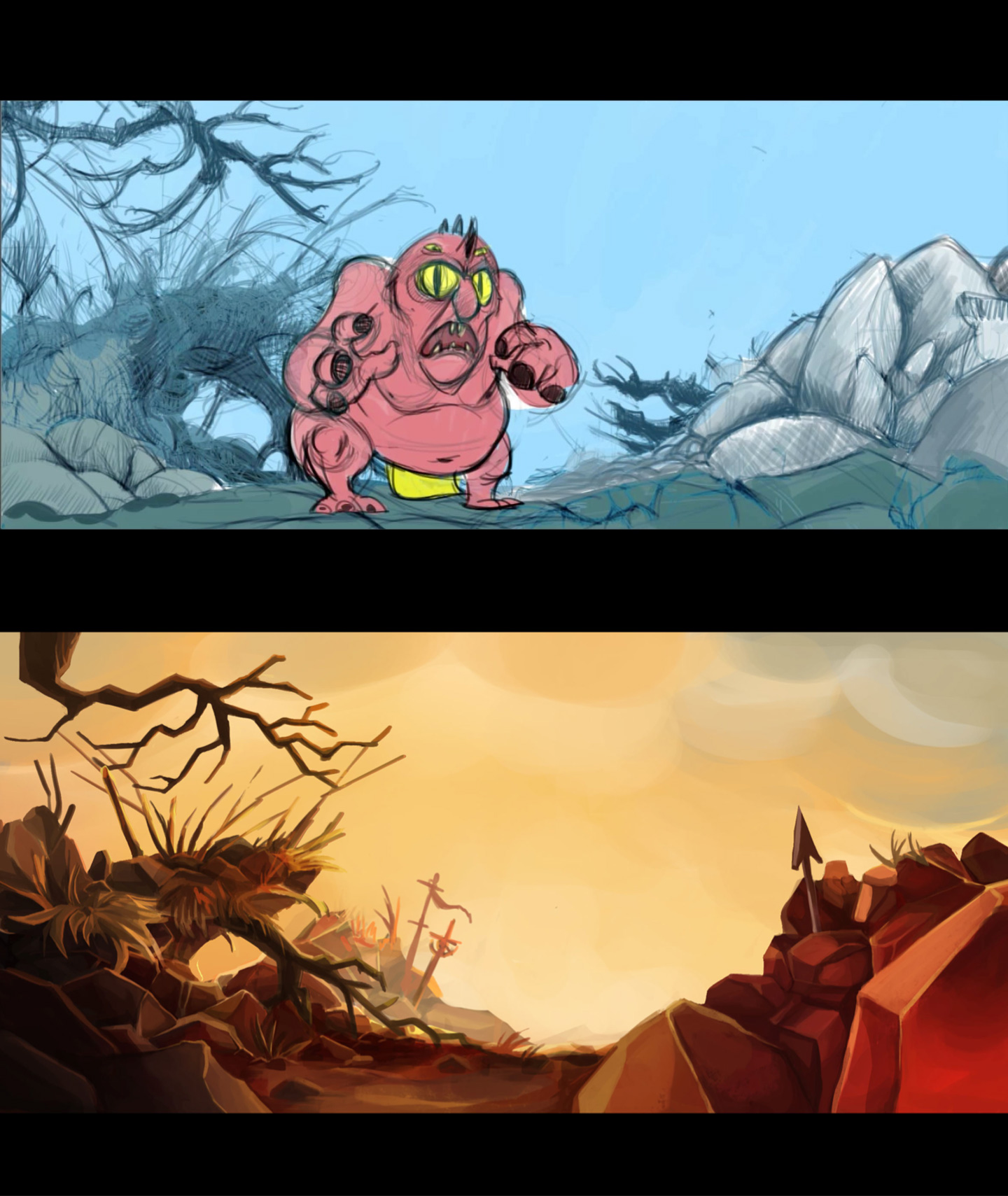 During the Animation Phase the team worked side by side to better manage the numerous scenes in which 2D characters interact with the two main characters, made in 3D.

Ruben (2D animator) has dedicated himself to the animation of the fighting sequences between Barbara and the various monsters present in the fantastic world of bureaucracy, divided between damned and guardians.

Giulio (2D animator) dealt mainly with the animation of some zombies, of characters in the office, and of the final bureaucrat’s sequence, with the character turning into a dragon. 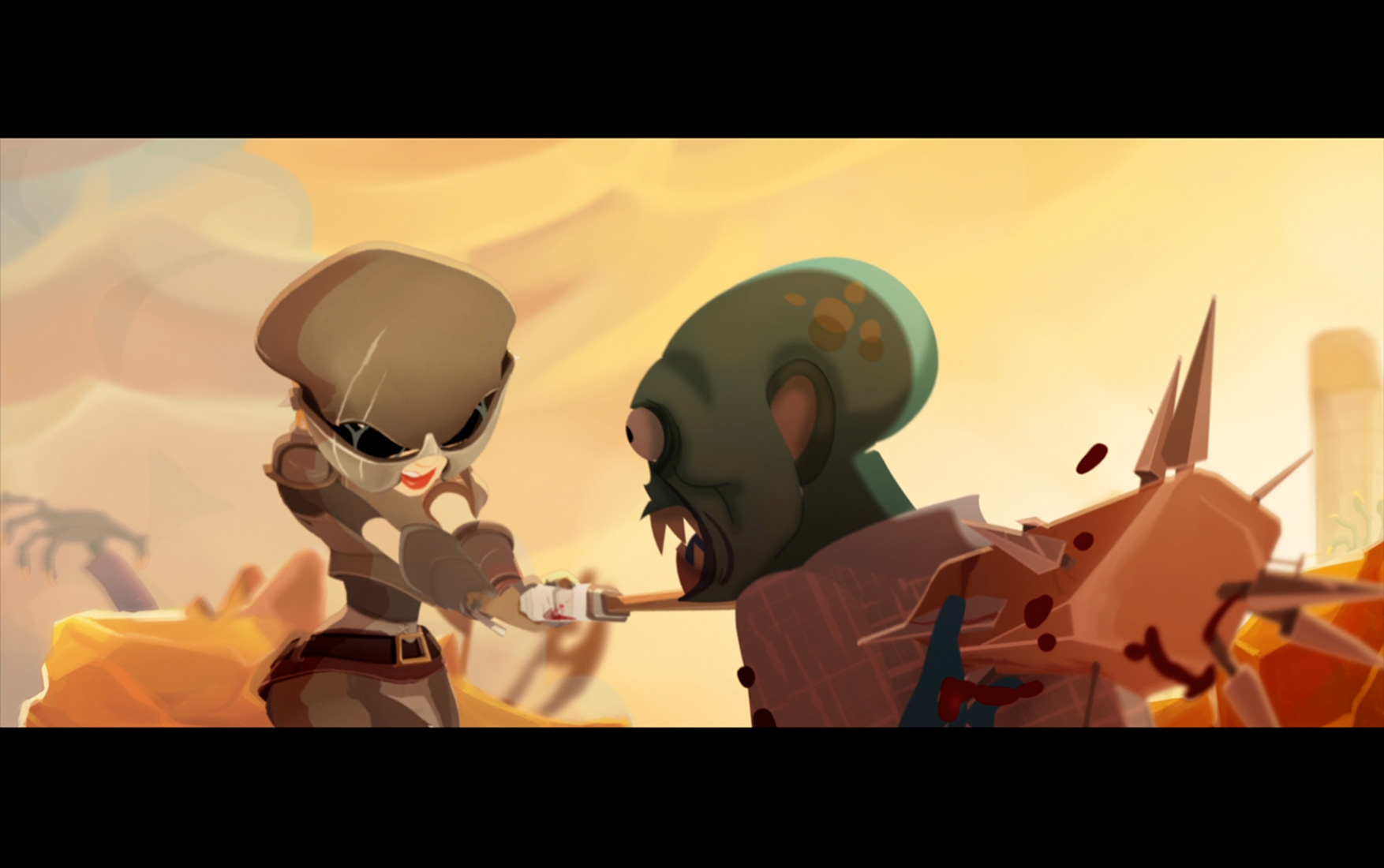 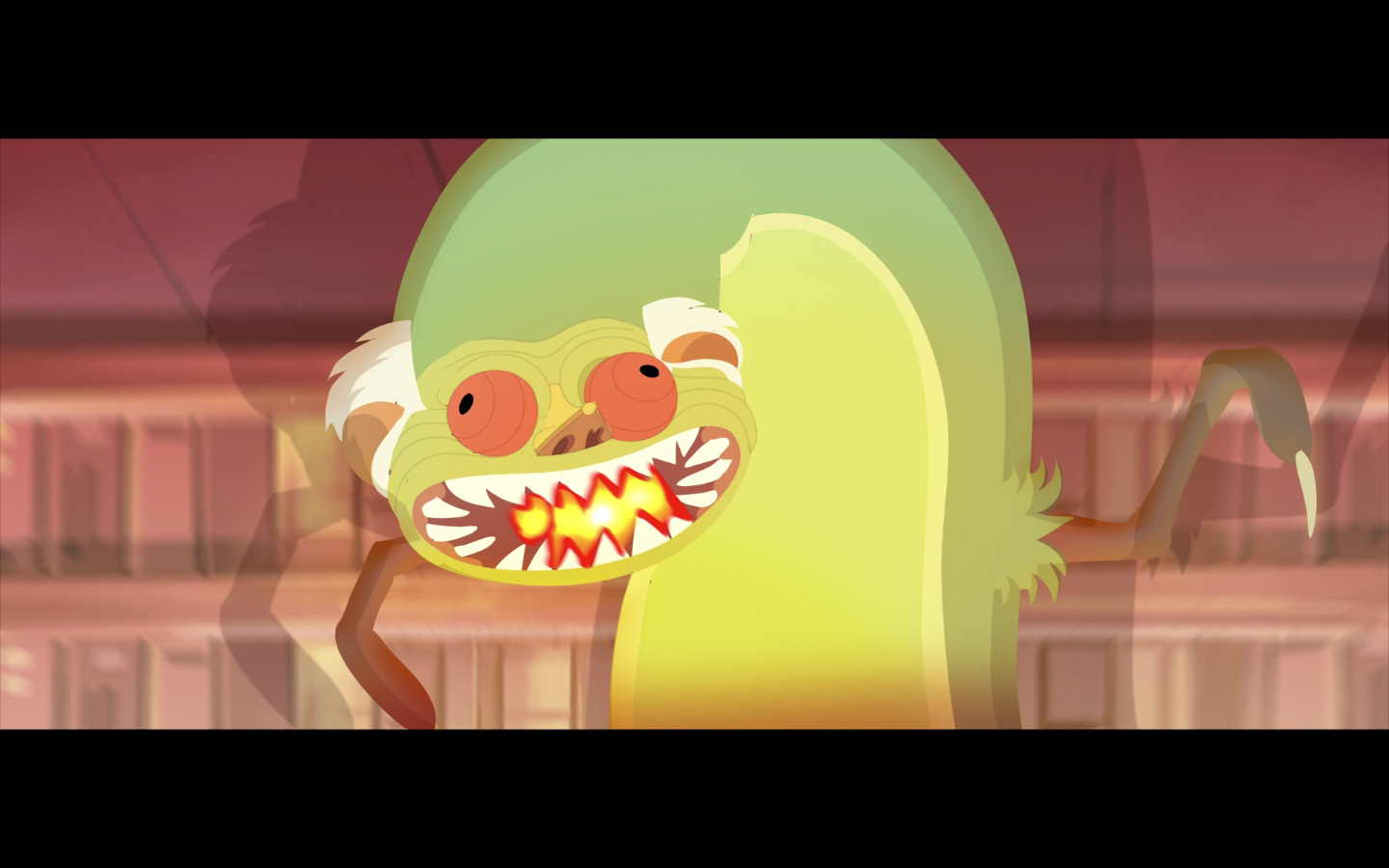 Salvatore and Eleonora have animated both the 3D characters: Eleonora has mainly realized the animations of the initial and final dialogues, and most of the action scenes (clash with the zombies, the battle with the demons under the Bureaucracy tower), Salvatore has animated mainly the path of Barbara from the ‘Office to the fantasy world, Gianluca waiting for the stamp, and the final challenge between Barbara and the Bureaucrat. 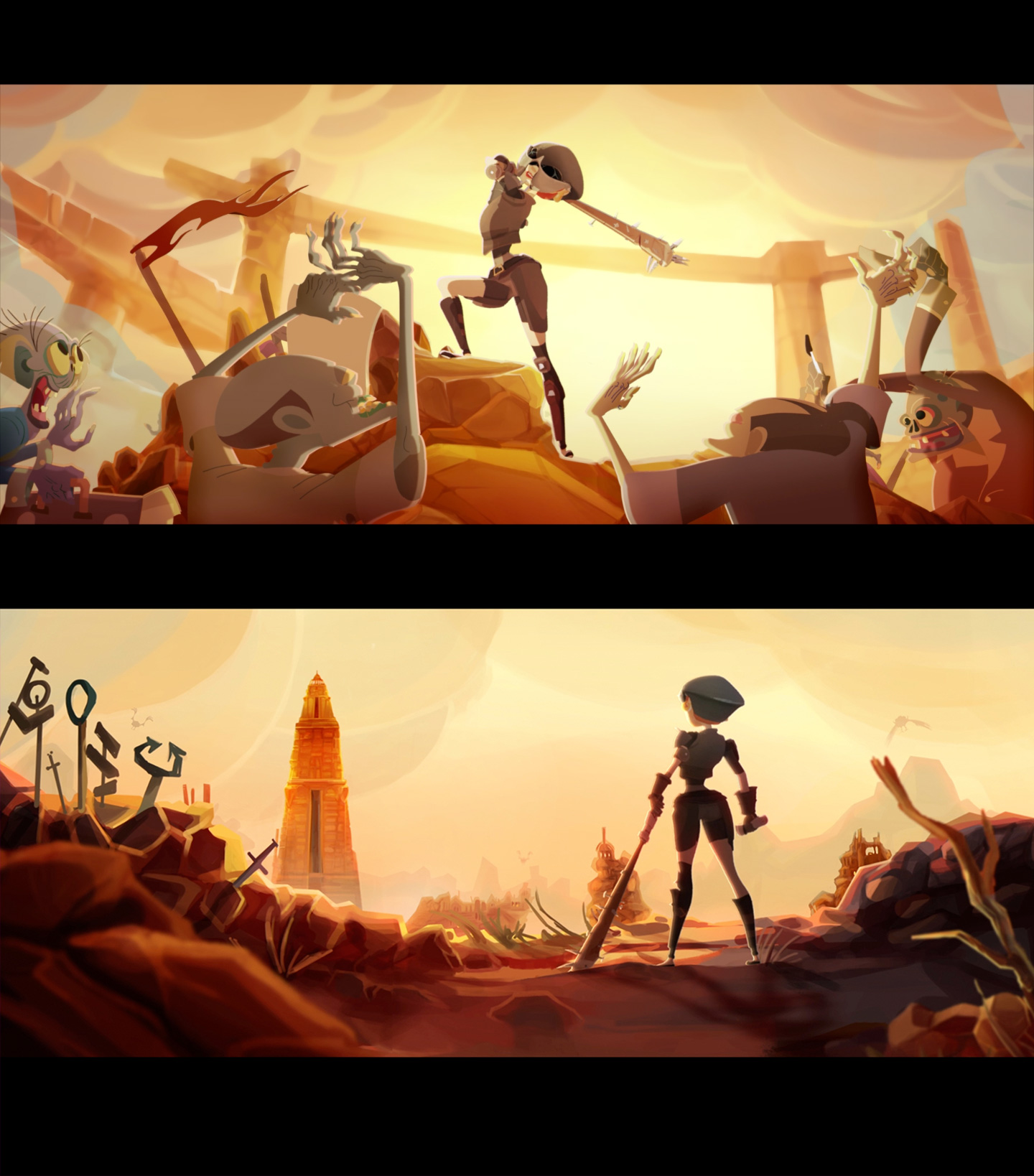 After the animation phase, there was a great work of compositing, whose main objective was to combine the various characters made with different techniques in one style. Create a vivid atmosphere, give life to a completely invented world.
To make this credible illusion much of the merit comes from the work of Fulvio Chiara (composer), Paolo Armao and Vito Martinelli (Sound Design).
The splendid work of Fulvio gave the scenes a musical soul, highlighting the key scenes of the film with the orchestrations.
Paolo and Vito have given life, as regards the suond design, to two sound places inventing and creating for the short sound solutions new and engaging.

Thanks to the production of the Piedmont Experimental Center, which has believed and supported the project, OFFICE KINGDOM is available in many festivals and even online a few days ago!