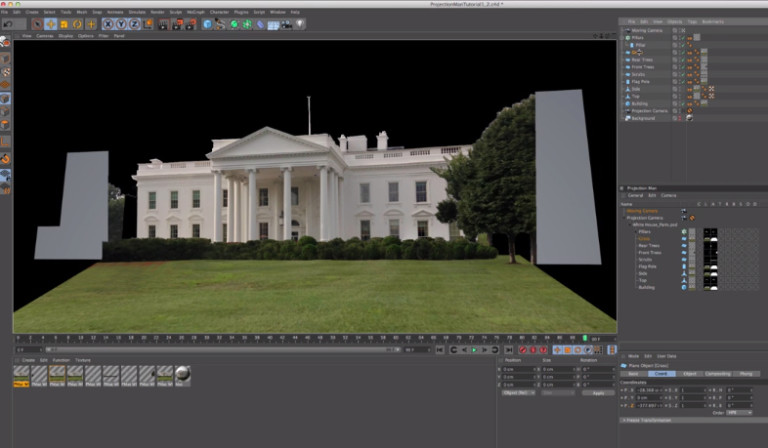 Projection Man makes camera mapping in Cinema 4D really easy. It speeds up workflow by automating a lot of tasks for you such as materials, keeping track of Photoshop files, and alphas. Projection Man can really help you get a shot that is nearly impossible to get due to budget or practicality. Thus it’s perfect for high budget and low budget projects alike.
In this example, we go through the basics to recreate a dolly and crane move on the White House. One can surprisingly stick a camera through the fence and grab a couple shots like I did so getting the photos is the easy part. In fact, the hardest part of using Projection Man doesn’t have anything to do with Projection Man at all. Spending time in Photoshop and breaking the photo or matte painting down into layers is the most time consuming. Mind you, if you have a very simple photo without any foreground objects you might not have to do any Photoshop layering.
In Cinema 4D, all one really has to do is set up the basic geometry of the scene and let Projection Man do the rest. One piece of advice, if you aren’t using any Cineversity Plugins, set up the scene to be the size of your photograph, such as 3500×2000 so your background photo does not distort, then switch to the correct format once your projections are set up correctly.
I’ve included the photo for you to use, but I encourage you to take your own photo, even if it’s of your house or apartment building, to see how easy Projection Man is to use. We finish the scene in After Effects using object buffers and Red Giant’s Magic Bullet Looks.