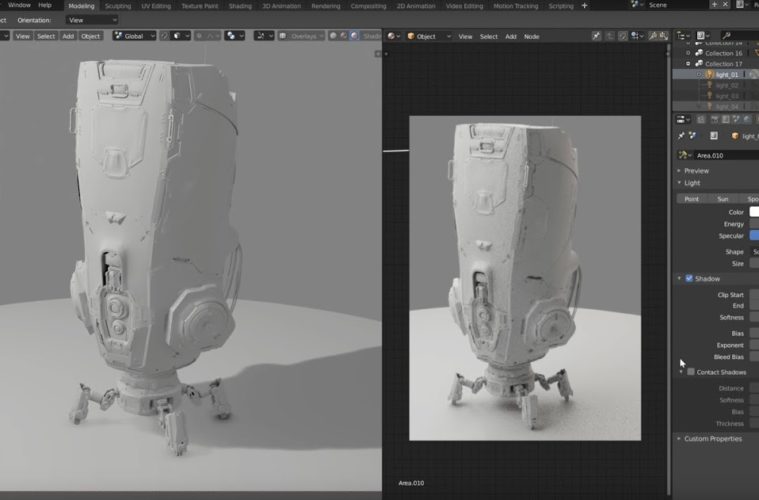 The next release of Blender 2.8, is the most exciting update since BMesh (n-gons) was added in 2.63.
From a new PBR Viewport to Workspaces, simpler UI and dependency graphs. the next big release brings updates all over the board. The main use of this technology is Blender’s new real-time render engine: EEVEE.

EEVEE is a fully-featured PBR (physically based-rendering) engine for real-time visualization. With advanced features such as volumetrics, screen-space reflections and refractions, subsurface scattering, soft and contact shadows, post-processing effects such as ambient occlusion, depth of field, camera motion blur and bloom, to name a few.

Blender’s 2D drawing capabilities have been greatly improved with 2.8. The new Grease Pencil focus is to create a more friendly interface for the 2D artist, while keeping the advantages of having a full 3D suite underneath.

Grease Pencil is no longer just a stroke, it’s now a real Blender object with huge improvements to brushes and tools.

Workspaces will allow users to build up their working environment for a specific task. For example there could be workspaces for modeling, sculpting, animation and motion tracking.

We’ll take a look at these and more…

Blender 2.8 is coming soon! Check out the EPIC new features that are coming with this new release!

EEVEE
A real time physically based rendering (PRB) engine directly in the viewport of Blender.

GREASE PENCIL
A full 2D animation toolset that allows you to create awesome 2D animations directly within Blender. It’s been revamped in 2.8 and comes with lots of awesome new features such as materials for all strokes, onion skinning, effects and more!

MATCAPS
Matcaps stand for ‘Material Capture’. They are spherical materials that encapsulate all lighting and reflections within a scene. You can apply them easily to help you model and sculpt without having to set up actual lights in your scene.

ZOOTOPIA HAIR SHADER
The new Principled Hair Shader is now available in Blender 2.8. This is the same shader that was used in Disney’s Zootopia!

WORKBENCH RENDERING ENGINE
A new rendering engine (now called ‘OpenGL’) is included in Blender 2.8. This engine has tons of shading and overlay options to work with and build up your scene before you switch to Eevee or Cycles for the final render.

OPEN SUBDIV
Pixar’s Open Subdiv technology will be integrated into Blender as a new modifier. This will make subdivision surface operations much faster, support smooth animations (even in Edit mode) and realistic creasing.

MORE
There are tons of other awesome features. Collections, static overrides, talk of an asset manager and other great tools coming in future versions.

Get Blender 3D for FREE
https://www.blender.org/download