Warning: Spoilers ahead for the rest of the article, so if you haven’t seen Blade Runner 2049, look away now….

In Blade Runner 2049, cinemagoers were treated to this surprising cameo from this character from the original film.

A young Rachel, played by Sean Young, is seen briefly in the film and MPC has revealed how it replicated Rachel 35 years on.

The MPC team was led by VFX supervisor Richard Clegg, who worked closely with director Denis Villeneuve and production VFX supervisor John Nelson. One of the major challenges was how to approach the CG sculpt of Rachael’s head with the same younger features as Sean Young. 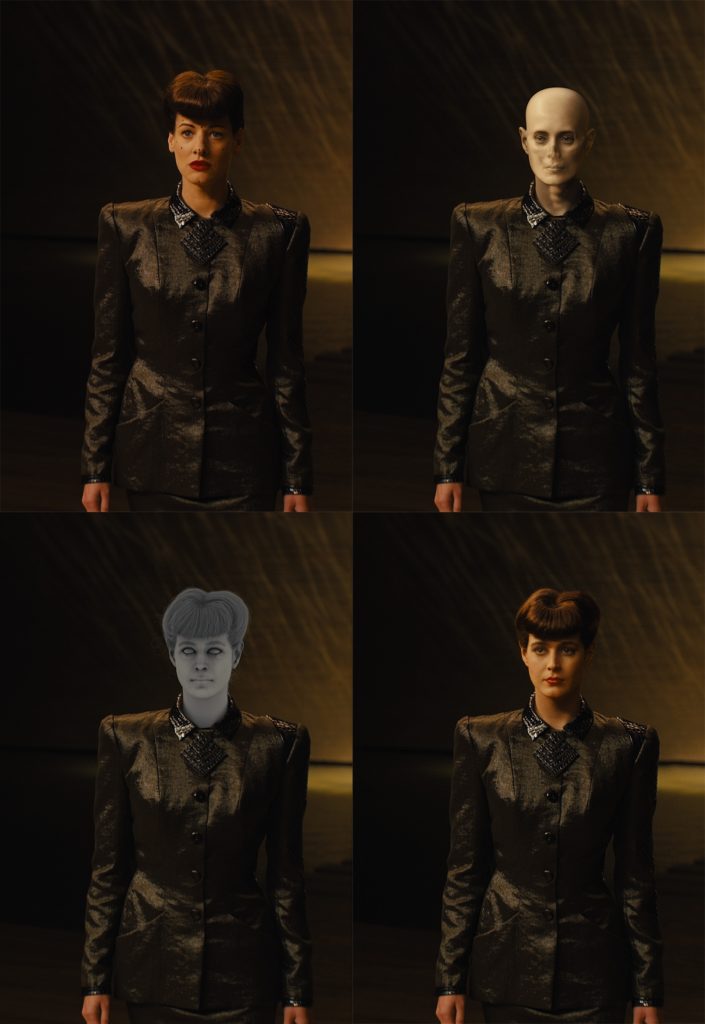 MPC’s team started off with a detailed present-day scan of Sean Young’s head, captured on a Light stage using the DI4D PRO Facial Capture System. This scan was used as a reference for MPC’s artists to hand model an anatomically accurate 3D skull. The skull is something that changes very little over time, so it was a good foundation for MPC to build their 20-year-old digital Rachael from. The digital sculpt gave the team a clear idea of the proportions of her head including the bridge of nose, cheekbones and jawline. 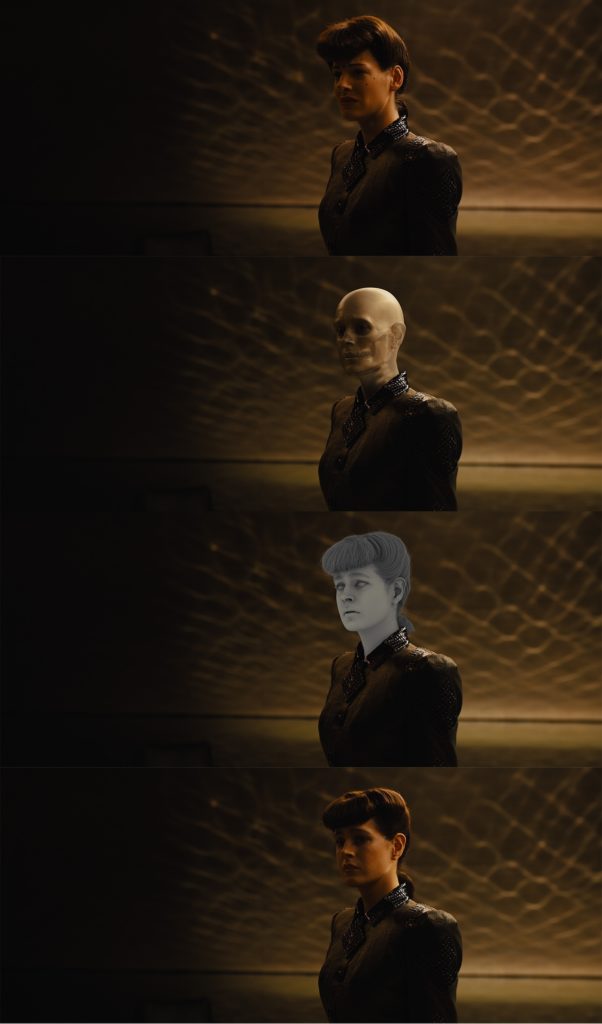 With the CG skull accurately re-created, it was lined it up against scenes from the original 1982 movie. The available footage of Rachael wasn’t always ideal, due to the dark and contrasty lighting with a shallow depth of field that regularly put her in soft focus so a great deal of guesswork was required. MPC’s 3D modeling artists then spent many hours sculpting the rest of the head over these images until they had created an identical match. 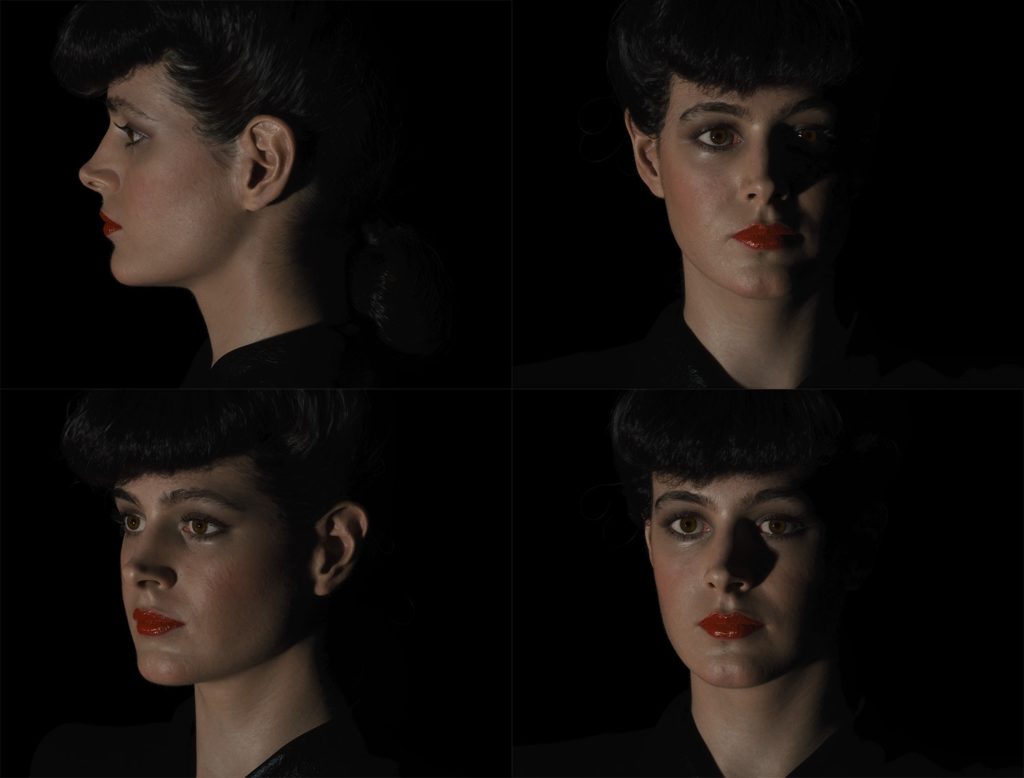 With the head sculpt completed the character’s hair and colour textures were worked on. The hair was styled using MPC’s proprietary groom software Furtility, built by MPC’s R&D team. The Furtility tool was used to match Rachael’s hair, eyebrows and eyelashes from her opening scene in Blade Runner.

To test they had accomplished a perfect likeness, MPC decided to re-create three shots from the original movie using their digital character. The CG head was then composited and reanimated over the top of the real footage. “We invited the filmmakers to see if they were able to identify the digital double from the real actress,” says VFX Supervisor Richard Clegg. “We knew we were on the right track as this proved difficult to do!”

For Blade Runner 2049, a body double – actress Loren Peta – acted out the performance with Harrison Ford, and MPC’s job was to replace the head with their photo-real CG head. Multiple witness cameras were set up to shoot each take and used to get precise Roto-Animation of the body double as well as track the animated stage lighting.

During the shoot MPC’s onset team also captured videogrammetry of the performance using Dimensional Imaging’s DI4D capture rig. They captured Sean Young and the body double, who both, directed by Denis, reenacted the performance for every shot. At the same time, they also took MPC’s FACS capture kit to capture an array of facial poses and expressions.

When it came to animating the shots, the videogrammetry data served as a valuable reference, however the characters entire performance was hand animated by MPC’s artists. This animation technique gave the animators more flexibility and the director more control. Hundreds of facial shapes were built all modeled against footage of Sean Young to maintain the likeness. Every detail was important to the animators, from the shapes that her mouth makes when she talks to the number of folds in her eyelids.

De-ageing techniques and digital humans have become increasingly popular in feature films and TV recently, just look at the likes of a young Robert Downey Jr in Captain America, Kurt Russell in Guardians of the Galaxy Vol 2, Michael Douglas in Ant-Man and Anthony Hopkins in Westworld in recent blockbuster hits.

MPC has itself opened a secret R&D lab, named ‘Shadow Lab’ at their studio, developing a number of different new technologies including digital humans.