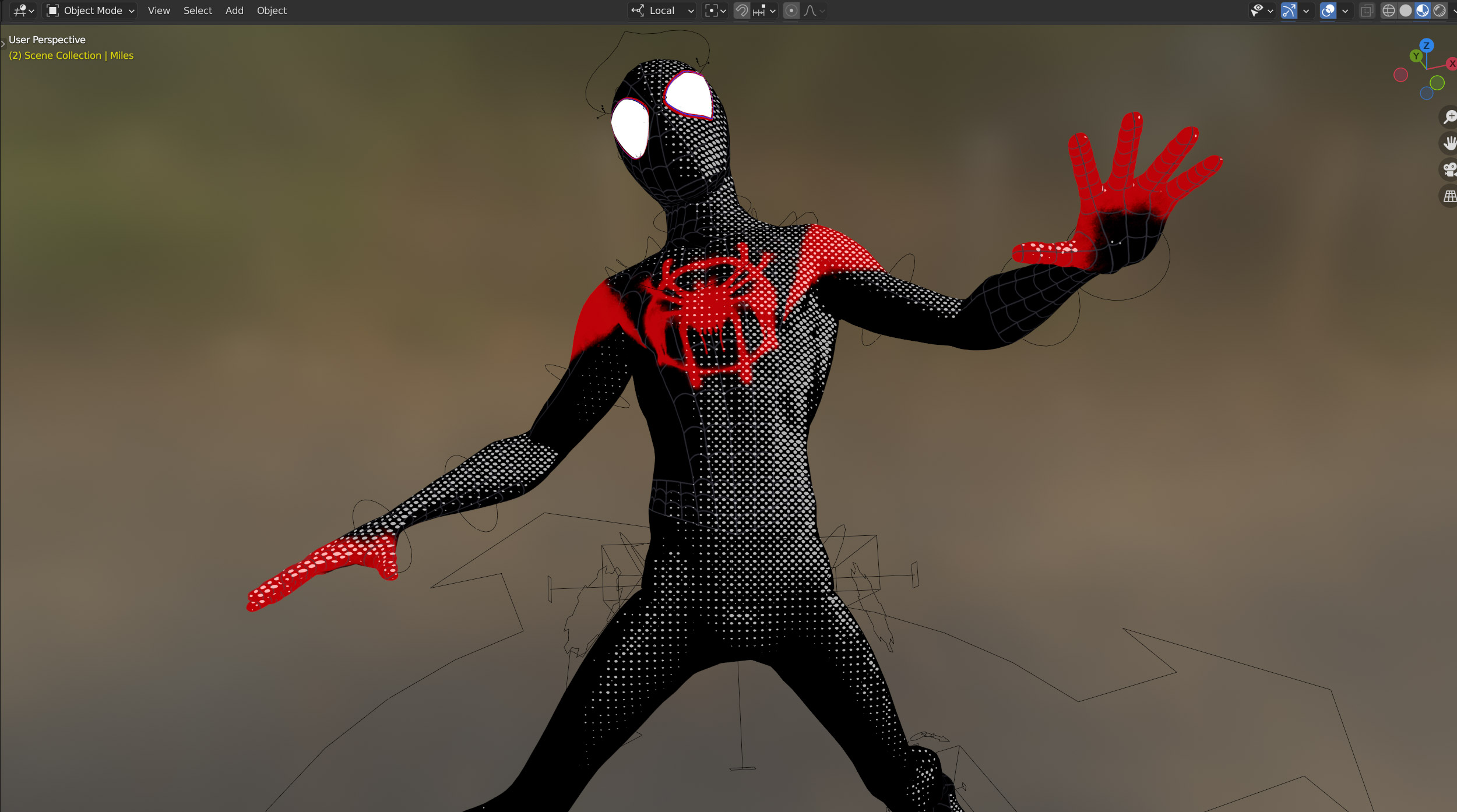 Hi Blendiarians, today we share this great character set-up of Spider Man 3d model. The resource was shared for download on Gumroad by Sebs Freelance 3D animator & rigging artist in Blender, giving a symbolic cost to the project or downloading it freely.

The Spider Man Miles Morales Rig 3D Model for Blender is mapped and rigged ready to use for everyone, all the set-up was made in Blender, this rig started as a simple side project, used by Sebs as an excuse to learn how to make IK fingers, after studying more functionality in Blender the author decided to share it with the community that helped him with the project. Also huge thanks to DoctorBro for sharing his shader for this project.

*The project is for Non-Commercial use only!

General use and User Interface
Being based off Rigify this rig comes with a simple UI to toggle it’s bone layers on and off in the Item tab.

You may run into this if this is your first time using one of such rigs, it’s 100% safe to run this code as it was generated by Blender itself.

To move the rig around a scene it’s best not to do so in Object mode, as it will mess up the eyes, moving the root bone in Pose mode is the ideal way to do so.

For appending or linking the rig in other project blend files it’s best to append or link the collection Miles.

By default, the file comes with High-Resolution mesh collection toggled on (49,000 vertices mesh); if your viewport performance is too low then deactivate said collection via the button and activate the low res version for better playback speed while animating (this mesh’s textures are not unwrapped properly and it has no corrective shape keys for certain deformations, don’t use it for final rendering)

This is the head’s Properties bones and it’s features are as follows: Shaderless – Turn’s off the halftone shader, leave only flat textures for the model
Subdivide – Enables the above picture’s smoothness of the eyes’ red outline (in viewport view only, doesn’t affect rendered), 0 = off and 1 = on
Subdivision level – Controls the subdiv level of the white part of the eyes in viewport only, this is set to 4 for renders; lowering it results in better viewport performance but a slight clipping issue with the mask below.
Width Inner – Controls the inner width of the red outline
Width outer – Controls the outer width of the red outline

There’s also these Properties bones at the base of each limb, they allow for IK_FK influence control, IK stretching, parent switching, etc.

Although these values can be seen, edited and even keyframed by selecting any bone from said limb (in the Rig Main Properties tab), all of said data is stored in the gears so to view or edit your keyed IK_FK influence, you need to first select the corresponding limb’s gear bone.

Hands also have their own properties bones!
IK Master Toggle – Forces all fingers on the corresponding hand to be in IK mode
Stretch – Enables the mesh to stretch towards the tip of the IK controllers
Vis Palm – Shows extra palm controllers

This bone will set up a rough pose for the fingers regardless of them being in FK or IK, fingers can still be posed after this.
It can additionally be rotated in it’s local X axis and the fingers will inherit it’s rotation.

The current IK system for this rig is a hybrid of IK and FK, with the IK bones defining the position of the fingertips, while the base of the FK chain can be used to either alter the rotation of the finger or bend it inwards near the tip.

Parent switching is also available for the IK fingertips, as well as snapping each finger’s IK to FK chains and vice versa.

Pivot bones give extra control to the torso, IK feet and IK hands. They can be translated towards anywhere without affecting the bone they are parented to, once set in place they can be rotated or scaled and will then affect said bone.